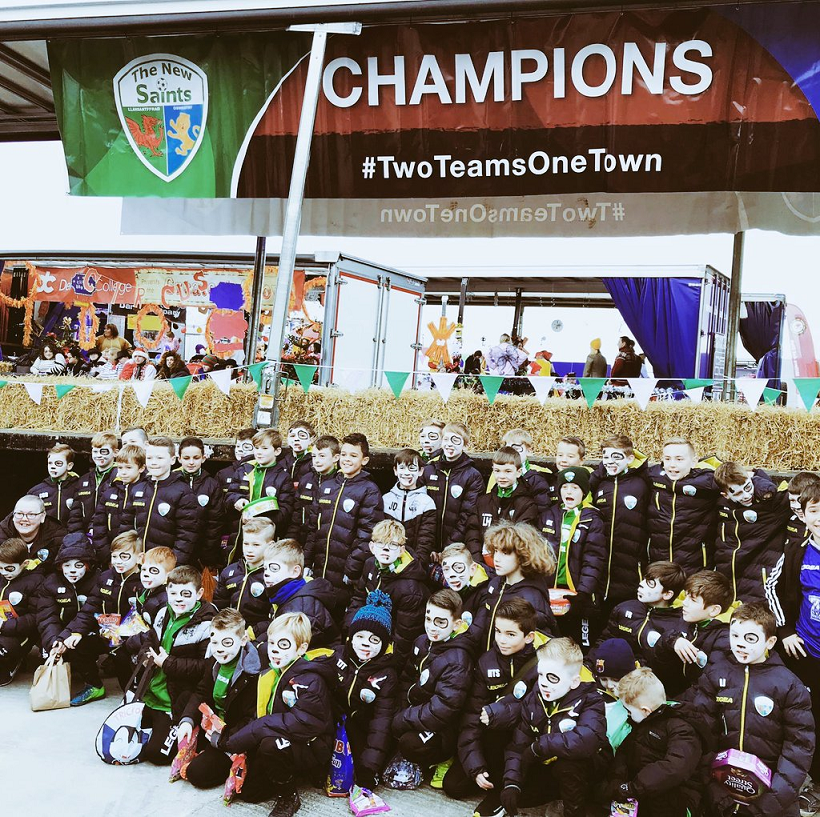 It was a weekend with a difference just past, as we enter into December and begin festivities, writes Jason Brindley, the Academy’s Manager.

On Friday evening, we welcomed Wrexham to Park Hall Stadium to face our U15s and U16s age groups. The latter were up first, and it was a good level game with our U16s applying an effective game plan. It’s good to see our players understanding in better detail their roles and responsibilities, plus discipline in moments of transition or when they are  without the ball.

We had a very much depleted U15s squad, however they were absolutely fantastic. They defended well, counter-attacked with pace and it was a very good contest.

Thanks to Wrexham for travelling to play us, we look forward to further games in the season.

On Saturday morning, our Foundation Phase and U12s enjoyed participating in the Christmas Parade, with our float going through the streets of Oswestry in front of thousands of waving people. We enter every year, with our Community Foundation Team, showcasing all that is great about our football club.

It is a great event and our young players really enjoy it: painting the town green and white, singing songs, throwing sweets to the people that line the streets. I think the staff enjoy it as much. I remember as a kid, every year I would go into town to watch the parade, so it takes me right back and it’s brilliant to actually be a part of it – and I’m a grown up (at times), so can only imagine how much the boys love it. It’s great to chant our football songs and have fun with the players.

Also, on Saturday, it was a proud moment for our former Academy player and current Academy GK coach and first-team player, Lewis Dutton, who made his first-team debut, at home to Mold Alexandra in the Welsh Cup. Lewis has been with the club since he was 12 years old, through our Academy and Scholarship, and now into our first-team. It’s great to see the player pathway.

On Sunday morning, we hosted Port Vale Academy with our U9s, U10s and U11s age groups. We have a real extensive fixture programme, playing a variety of opposition across the board. It’s good to expose our players to a variety of different challenges and scenarios. Port Vale had some excellent age groups and we thank them for travelling.

We also hosted Christleton with our U8s. It was a very good game, with some excellent football played by both teams.

Our U13s travelled to Deeside to compete in Futsal. As the U13s is non-competitive this season, we took two teams to compete against eight other Academies who also had two teams each. This age group qualified for National Futsal Finals last year, travelling to Cardiff to compete, so they have a good understanding of how we want to play. Both teams were outstanding again and played some fantastic stuff.  Technically, this is a fantastic group.

Our U12s and U14s hosted Llandudno FC and Caernarfon Town respectively, at Park Hall Stadium, as they returned to FAW Academy Cup Super6 action. Both age groups produced strong performances and took on pre-match information, applying themselves very well.  Our U16s travelled to Airbus on Monday evening; it was a frosty one at the Wingmakers, and the game was played to a good standard.

It has been really positive week for many reasons; it has been really enjoyable, lots of fun and loads of games for our youngsters. We have a couple of weeks left until we have our short break for Christmas. During the break though we will be busy reflecting on the year gone and also looking ahead to a new one, with new opportunities, a more detailed programme and new ways we can continue to challenge and develop the players.