The New Saints: Off The Pitch – Community Foundation 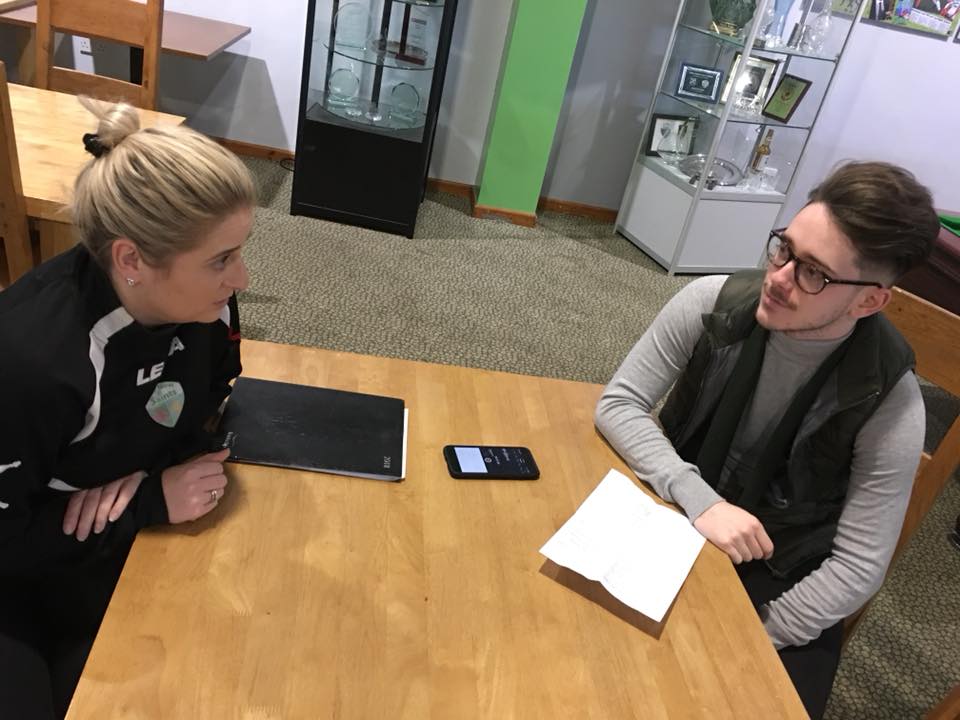 For some time now we have been working with the Broadcasting, Journalism and Media Communications department at Wrexham’s Glyndŵr University. This has involved giving students practical hands-on experience at Park Hall, especially on match days.

One of the degree students, Sam Barton, interviewed TNS Foundation’s Naomi Stocker recently as part of his course work. The finished article, as submitted by Sam, can be read below. For our part we don’t proofread, alter or amend in any way but publish exactly as received.

The lead photograph is Sam interviewing Naomi at Park Hall.

The New Saints: Off the Pitch – Community Foundation

As the 2017/18 Welsh Premier League season begins to draw to a close, preparation for celebrations should be well under way after yet another successful year for The New Saints, who claimed the top spot with a number of games left remaining. However, TNS may be known for their quality on the pitch, but their quality off the pitch deserves equal amounts of praise. Naomi Stocker, Coordinator of The New Saints’ Community Foundation highlighted examples and intricately explained, the full extent of charitable work that goes on behind the scenes in Oswestry Town and surrounding areas. It showed a club not only with talented footballers, buta staff of selfless people who take pride in the club, but also have the desire to help others as well.

In an interview with Naomi, she explained that the foundation, “is the charitable arm of The New Saints Football Club.” The club has been running the foundation for around 4 years. Naomi said, “we started off relatively small and now we’ve branched out quite largely.” When asked what the foundation is about Naomi said “we are involved in the local area, providing sustainable activities for people to enrich their lives, whether it be a senior exercise class or an after-school club. We want to raise the profile of the football club and provide the community with affordable, accessible sessions.” From Naomi’s introduction, it was clear that the local community was of great importance to The New Saints, and rightly so. The foundation coordinator went on to disclose the scale of what they do, she described the on-going charity work as “a massive project” and that the foundation, during the Easter half-term “put on free holiday activities” including“Multi-Sport”, visiting Weston Rhyn, Gobowen, Trefonen, St. Martins, Oswestry and Ellesmere, clear evidence that not just Oswestry, but the surrounding community are valued highly by The New Saints and its foundation.

With The New Saints being reigning Welsh Premier League champions, Naomi highlighted how being a known football club has benefitted the foundation and vice versa. “We want to raise the profile of the football club as much as we can, these guys compete in the Champions League, they’re Welsh Premier League Champions, Welsh Cup Champions, we want to introduce these guys to the community”. Questioned onhow the club and foundation cross over she continued saying “we often run competitions on the back end of sessions, get a select few players down, they’ll come and engage with the children, the children get to meet them and possibly see them as role models”. Asked whether she believes that people get involved with the foundation because TNS is a football club Naomi responded “There’s an element of that. I think the foundation is successful in its own right really, the way that it’s expanded over the past 4 years. We’ve got The New Saints badge there but a lot of the work we’ve been doing over the past couple of years has been off our own accord.” A great statement, highlighting that the foundation isn’t drawing people in because it’s part of a football club, but because it’s caring for the community as a charity should do.

UK sports media is so heavily focused on the likes of the English Premier League, Welsh football appears to be overshadowed, with publicity ultimately remaining within Wales. However Naomi threw light upon the fact that since beginning the foundation, not only are The New Saints helping the locals, at the same time, the name of the club is certainly spreading. “The badge is out there, everywhere now. We’re engaging with so many different people and we’ve got a great facility here at the venue. These guys are competing at top level football and we want people to come here, utilise the facility and support the team.” As all football clubs believe, without fans there is no team, so it really is evident that TNS as a whole want to give back the support the fans show the team week in week out.

With a short trip down memory lane, Naomi elucidated the breadth of work that the foundation is involved with, “if I can just take you back to four years ago, we were in one school, once a week, but now, certainly in the summer where we attend events and put on events, it’s seven days.” However, every success comes with its struggles. Naomi identified the main issue for TNS being the move from Llansantffraid to Oswestry. “I think it’s been difficult for the football club to gel with the local community” she added “It is a massive shame for them. You’ve got a team competing in the Champions League and they don’t seem so fussed.”

Despite the issues between the local community and The New Saints, Naomi turned a negative into a positive, explaining that the facilities at Park Hall and The Venue have been of great benefit. “I think I’ll draw on our ‘All-In’ session which is funded by the Short Breaks team and that’s disability sport,we have sessions every Friday, a younger group and an older group, alternate weeks, these are children with additional needs, that don’t always want to go on the pitch and do sport.” Asked what exactly takes place during the “All In” sessions, Naomi added, “We keep it indoors, we’ll utilise the bowling alley, we’ve got a lovely space downstairs where we do arts and crafts and games. Having this facility, we’re very very lucky.” Compared to many Welsh Premier League teams, TNS’ facilities are what many clubs would dream of having access to, which the foundation are clearly capitalising on.

With today’s generations being so reliant on technology, it was interesting to hear how the foundation takes advantage of modern methods to promote the work they’re involved in, with social media playing a large role in this. “We explore every avenue we can, we do rely on social media, everybody seems to be on social media these days, so Facebook, Twitter and we’ve got an Instagram page as well.” Aware that some people may not use social media Naomi added “we’re still using old-school methods, flyers, visiting schools, distributing our information that way, we also use the local press via [Media and Communications Officer] Stewart as well, so any way that we can really.”

As with every charity, donations are a key part of the funding to help the foundation flourish. With staff at TNS and members of the public donating via their own events, the support for the foundation is most definitely there. “There’s talk of the facilities manager doing a Snowdon walk to raise money for the foundation.” Naomi continued by clarifying “of course it’s not all take, take, take, we support others and other charities as well.”

With a brief spell of warm weather in mid-April, the foundation coordinator was eager to mention the wonderful activities the charity will be involved in over the summer months. “We’ve got a busy event season coming up, we’ve got our ‘TNS in the Park’ where we visit Cae Glas Park in Oswestry and we’re also rearranging sport relief as we had some bad snow in March.” The events the foundation are holding are not simply football focused activities, but instead a complete variety of genres with Naomi adding “The needs of the local community wasn’t just about football. We do Zumba, we do hula-hooping, we do cheerleading now. From going from providing football sessions to doing cheerleading, it’s massive.”

It goes without saying, the work produced from the foundation is providing a vital service in and around the community of Oswestry Town and the appreciation only seems to be growing with more and more positive work taking place. Naomi closed the interview by giving prominence to a few personal highlights. “When we started holiday activities, we were getting nobody turning up. Fast track 4 years down the line, we’re having 30-40 children at each session. It’s been fantastic for me to see that grow over time. Also our exercise referral programme, we’ve had some real good success stories there. One lady joined the programme, fast forward to now she’s like a different lady, she’s lost five stone, she’s able to bend her knees again whereas before she could hardly move and it’s really nice to see the work of the foundation enrich and improve people’s lives.” A touching sentiment to finish on, paying homage to a charity worthy of all praise it receives as it continues to improve the quality of lives for many and will no doubt continue to do so for years to come.