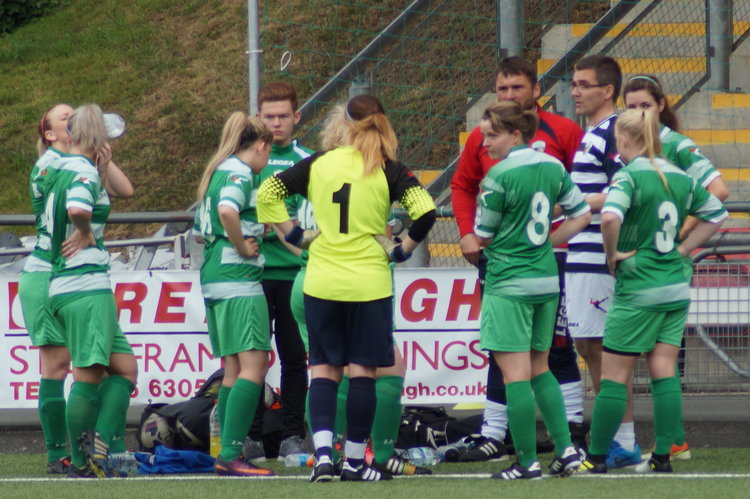 By Stewart Bloor   |   December 17, 2017
Comments Off on Andy Williams Reflects On TNS Ladies’ Season So Far

With matches falling foul of the weather this weekend, it was an ideal opportunity to catch up with TNS Ladies’ Manager, Andy Williams.

Alongside their male counterparts, our Ladies team also found that their weekend fixture had been postponed.

TNS: Andy, the team is on a good run at the moment, how frustrating is it when games are called off, or is it just one of those things?

Andy: We work in meso-cycles so I guess in that sense disruption is not welcome, yet in football it is important not to get derailed by factors out of your control.

The weather and postponements at this time of year is part of the game, so as a manager you just have to be circumspect when these things happen.

Nevertheless, heading into an important phase of the season as we are, the break can be seen as a blessing.

Whilst it has allowed me an invaluable opportunity to reflect on the team’s progress so far and to begin planning the next cycle, it has allowed the players some well earned rest and time to recuperate from a challenging schedule.

TNS: With TNS Ladies not being a full-time side, how do you keep the girls fit, motivated and focused when you don’t have them to work with physically in one place?

Andy: This is where I rely on a combination of my experience and the skills of my team in creating the elite environment for our players.

When we are together sessions are planned in such detail that they offer all players something different; we like to keep things new and fresh with an element of learning.

Sessions are always high intensity with seamless transition between each section. The messages that we give out all come within the training itself and are supplemented via electronic media later on.

TNS: This is the second weekend without football. The games were against Leicester City and Burton Albion. They are certainly high profile opponents. That’s got to be good for the club all round?

Andy: We never really talk about the reputation of clubs we are facing, we want them to worry about us. TNS as a club has a strong reputation and our job this season is to establish the reputation of the ladies’ team as a key player within the female football pyramid.

We are quietly going about our business, letting our football do our talking for us.

TNS: Talking of high profile, in just a few weeks time there’s a massive game coming up. Tell us about that.

Andy: With the current weather break hitting, we now have an unexpected long lead in time to this game; as we speak we are just trying to get a revised training plan together which is proving quite challenging!

Newcastle have a longer and more established history in the female game than we do but that excites us rather than fazes us, as does the opportunity to appear in the 3rd round of the SSE Women’s FA Cup for the first time.

The long overnighter will be an experience, but these are the reasons why we are in the game. It will be a highlight of our season, one we intend to enjoy, make no mistake.

TNS: Back to the previous round, it was a very close encounter with Sporting Khalsa Women that went to a penalty shoot-out in the end. What preparation had the team done for that eventuality?

Andy: We’d prepared well for Khalsa as a team, we knew they were a dangerous opponent on a good run of form.

The game plan itself worked well apart from their first goal; the second goal was a rather debatable penalty in my eyes!

As for penalties, well we have our little strategy, but essentially it comes down to fitness which is one of the main reasons we train with such high intensities – so we are running stronger than our opponent beyond the conclusion of the game.

TNS: Now to yourself, Andy. You’ve been at Park Hall for six months now. How’s it going?

Andy: If back at the start you’d have told me how well we’d be doing at this stage then I would have bitten your hand off!

Firstly, I must give massive credit to the Chairman (Ian Brazier) and my staff (Will 1, Will 2, Lawrence and Alex), they’ve been a massive support.

But secondly the players, they’ve been brilliant with me as well. We talk a lot, we have a very open relationship.

They’ve bought in heavily to what we are trying to achieve; we don’t just want to win, we want to be better at this game and more willing to develop as people.

It’s been a very exciting period with lots of pluses and lots of firsts. Individually and collectively the team keeps on improving, and the results haven’t been too bad either!

TNS: So far, of course, nothing has been won. Every coach wants to win every game and every competition but realistically what would you be happy with come the end of the season?

Andy: Exactly! You’ve just taken the words right out of my mouth. As good as we’ve been to this point we haven’t won anything yet, we are acutely aware of that.

For us it’s about that next game, being focused and as ready as we can be. The sticking points so far have come either because of injury or because we have got ahead of ourselves confidence wise.

You won’t get any end of season predictions out of me I’m afraid. All I’ll say is we are always learning, always improving; so we’ve revised one or two aspects of our game as a result.

Those that know me say I’m never happy, but I’m very confident we’ll all be happy come the end of the season, no matter what the results!

TNS: Andy, thank you for your time. Hopefully it will be back on track next weekend as far as the fixtures are concerned.

Andy: Thanks Stewart. I’d like to wish our supporters and everyone connected with TNS a wonderful Christmas.