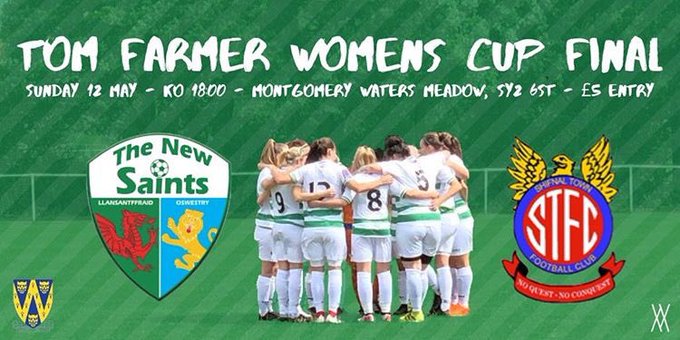 By Stewart Bloor   |   May 10, 2019
Comments Off on Support The New Saints Ladies FC In The Tom Farmer County Cup Final At Shrewsbury Town’s Stadium This Weekend

This Sunday (May 12, 2019) is the season’s grand finale for The New Saints Ladies FC, as they take on Shifnal Town Ladies FC in the final of the Tom Farmer Shropshire County Cup.

The competition is one that TNS Ladies have an excellent record in and they go into the final as current holders, having beaten Shrewsbury Town Women last season at AFC Telford United’s New Bucks Head.

This weekend’s game is at Montgomery Waters Meadow, the home of Shrewsbury Town FC. The postcode is SY2 6ST, kick-0ff is 6.00 p.m. and admission is £5.00.

Ahead of the big game, we caught up with TNS Ladies’ manager, Lawrence Wilson.

“Getting to the final in the first season of being in charge of the Ladies is a great achievement for me.” he told us.”Having had to near enough rebuild the squad from last season I am proud of my players that have stuck by me throughout to get to this point.”

Turning our attention to the Tom Farmer Cup, Lawrence continued: “It has been a very successful competition for the team, one which they have won 10 times – the 10th being last season. There isn’t any personal pressure, the team know what I expect from them in every game. It will be exactly the same for the final; it’s just another game in my eyes.  Everyone needs to be 100% focused on the game in hand to get the right result we want.”

“Having been a part of the coaching team that won the cup last season, it will be slightly different managing the team this time round. I will feel pride when walking out onto The New Meadow surface in charge of my team – which manager wouldn’t in a final at a fantastic stadium. But as soon as the match starts I will be keeping my emotions under wraps until that final whistle goes.”

“We have prepped as we would for a league game, we have an idea of how Shifnal will play. After playing them last season in the quarter-finals, we know what they are about and we are expecting a tough game on Sunday.”

With a good squad at his disposal, we asked Lawrence how his managerial selection headache was, ahead of the game. “Honestly, picking the squad for the cup final has been the hardest decision ever in my managerial career, as every player has given me their all this season and I know that some players are going to miss out. I wish I could give everyone the chance to play in the final which is what they all thoroughly deserve.”

Everyone at The New Saints FC wishes Lawrence, the staff, and of course the players themselves all the very best in the final this weekend. We would love to see you there, supporting the side in person, but if you can’t make it, we will be bringing you updates via the club’s social media platforms of Facebook and Twitter.